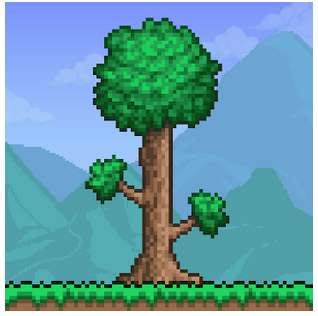 Terraria is one of the most popular indie android games that was created back in 2011. Initially, the game was created for personal computers, but due to the huge popularity among gamers around the world, developers was created versions for the android and ios phones, tablets and other gadgets. The main goal in Terraria is the destruction of the Moon Lord, this is the main boss, but to do it we must defeat other bosses first, such as Plantera, Skeletron ,Wall of Flesh, Duke Fishron and other villains. 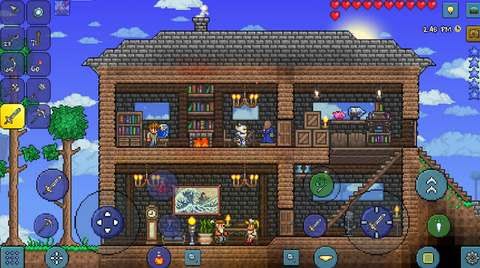 At the beginning of Terraria, we must create our character. You are not limited in the choice of hair color, skin and clothing. Then you need to create a world by choosing from three available sizes – small, medium and large. In the large world, you can find more of resources, however if you are a beginner and will play alone, we advise you to choose the average size of the world. The next step will be the selection of the “evil” biome which will infect your territory.
This may be The Corruption or The Crimson. Each of these biomes has its own unique boss. That why if you complete the game with a Crimson biome, it will be no less interesting to go through it again choosing the Corruption as a bad biome. After waiting a bit while the world is being generated in the terraria for android, you will find yourself on the map and begin your path of survival, killing bosses and passing various events.

So, first we need to understand where to build a house for ourselves and NPCs. They are useful characters who do not participate in the games plot, but can be very useful as they sell various things or healing you (of course for money). Run right and left to the end of the map, determining where the bad biome is located, your house should be kept away from it since this biome tends to grow and hit everything in its path and if it gets to your house all your NPCs will disappear as they cannot live in the infected biome.

After you choose a place for your house, you must start cutting trees, open chests, collecting useful loot and looking for the entrance to the mine …

Terraria for Android, which you can download for free, is almost has no different from the version for personal computers. Many complain about inconvenient control system, but the big plus is that your favorite game will always be with you – at home, on the road, at school.